Paying off six figures of student loan debt is no easy task. Find out how I paid it all off with the Debt Snowball Method (Dave Ramsey) and a 401(k) loan. 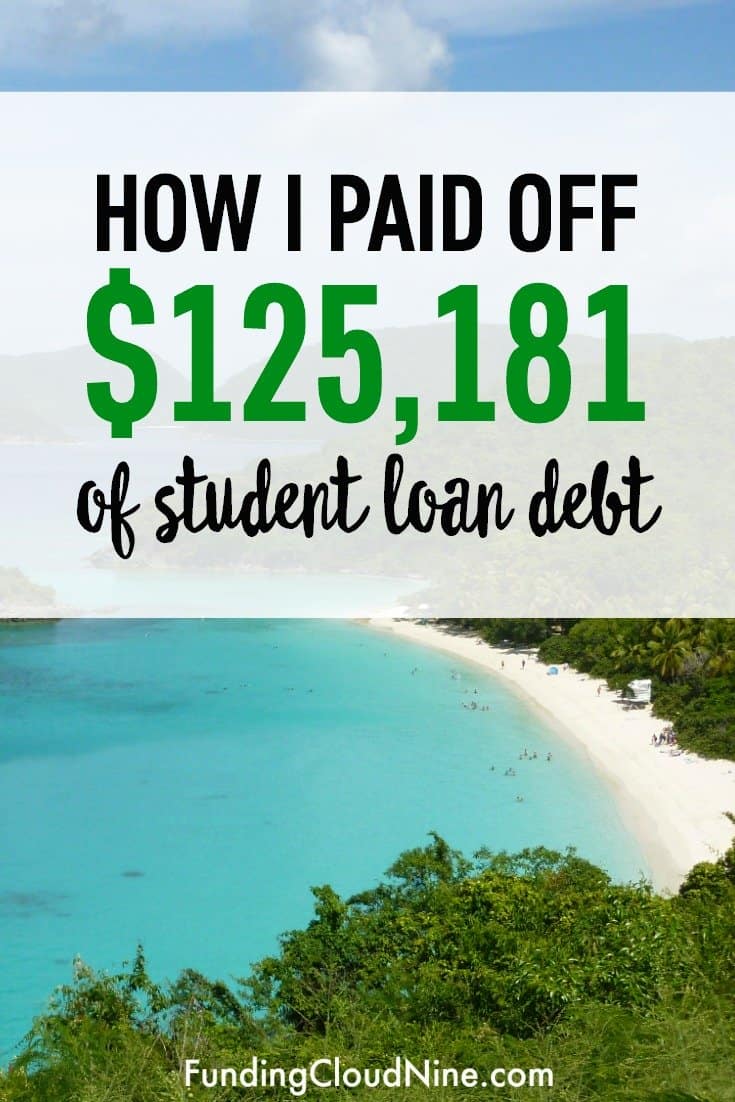 Without a thought of how I was going to pay for four years of out-of-state tuition, I asked my mom for the $200 deposit to hold my spot as a student in the Class of 2009. Later that year, I filled out the roommate request form, ordered football season tickets (another $160, thanks again Mom), and was ready to go.

My mom filled out the FASFA and an application to take out private student loans. Filling out the FAFSA resulted in the opportunity (ha!) for me to borrow $5,000/year. I was approved for the private student loans – I was the borrower and my mom was the co-signer (although I did not understand that at the time). I signed the loan documents without reading them…without even knowing how much money I was borrowing.

And then I started my freshman year. College was….just the best! I got an engineering degree and met my future husband. Each year, I filled out that same application for my private student loans – I asked for money, and wah-lah, it appeared.

After I graduated college, I started working as an engineer with a salary of $60,000/year. The student loan bills started trickling in. During college I had never calculated the total amount of money I was borrowing, and I had no clue what my monthly payments would be (Is this common?).

After graduating, I found out that I had a six month grace period for my student loans. That means that I did not have to make any payments for the first six months after graduating, but the interest would still accrue.

With only a few hundred dollars to my name, I decided to take advantage of the grace period because I had so much going on in my life at that time – new job, new city, new friends, new responsibilities. I felt it was best to get adjusted to these new things, and focus on excelling at work and then I could turn my attention to these monstrous bills. Plus, I needed some money to pay for my first month’s rent (+ security deposit), a bed, and some of the other basics of living (kitchen stuff, table, etc).

I was taking home about $3,100 each month (I think, I’m not exactly sure). This was after taxes, after health insurance was deducted, and after my retirement contributions to my 401(k). All I remember was that there was not a lot of room in my budget in the beginning.

I prioritized my student loan debt, then my rent, then utilities, then everything else. I had to live pretty frugally and that was hard because I was living in a very expensive part of the country. My rent bill was the same as my student loan bill – that’s insane! I’m not sure if that speaks to how expensive the area I lived in was, or how much student loan debt I actually had.

Oh wait, I owe even more?

I’m not quite sure where to fit this into the story, but about 9 months after I graduated (and a few months into paying my student loan bills) I got a letter in the mail saying that I was seriously delinquent on a student loan. They were threatening to send it to a debt collection agency if I didn’t start paying. This was really scary.

First of all, I had no idea what they were talking about. I was so diligent on paying all my student loans (well, what I thought was all of my student loans). Second of all, I felt like I was in trouble and ruining myself financially because I was delinquent on this debt. To make a long story short, apparently I took out $4,000 in student loans and wasn’t aware of it. Since I didn’t realize I had this loan, I wasn’t making the monthly payments. I think they were sending bills and delinquent letters to my old college address.

Around the same time I received the first call, I was given an opportunity to work overtime on a big project. That meant long hours, but a lot of money. The project lasted three months and I was able to make a $4,000 payment and get rid of this loan for good (yup, I got so scared I just wanted this loan and company out of my life).

For the first two years after graduating, I had focused on making the minimum payments each month.

It was a little demeaning to pay almost $1,200 each month and only see your loan balance go down a few hundred dollars. Yup, I was basically throwing away around $1,000 each month in interest. A few years in, I still had six figures of debt. I felt like I was paying so much money each month to this debt (and I was!  it was almost 40% of my take home pay). I wasn’t getting anywhere.

After I had been at work for a few years, I was starting to get pay raises, and I had a little extra money each month. I wanted to see if I could put extra money towards the debt.

Tons of articles and spreadsheets later, I decided that I was going to pay a little extra each month on my highest interest loan. I did this for a few years, and honestly, I still didn’t feel like I was making a dent in my loans.

About 3 or 4 years after I graduated, after hitting my stalemate and googling “how to pay off your student loan debt”, I heard of Dave Ramsey. I read some articles about him and I bought his book (which is a must-read). I read it and loved it. But I didn’t do anything about what I had read. Then I found his radio show. I listened for a year. And I still didn’t do anything.

And then I just decided “it’s now or never” and finally started the Dave Ramsey plan. I listed ALL my debts, and I started paying off the one with the lowest balance first (the Debt Snowball Method). I was making pretty good progress. But it wasn’t going as fast as I thought. I was still contributing to my retirement – it was one thing that I couldn’t give up (even though it’s part of Dave Ramsey’s plan). I also don’t think I was as “hard-core” as other Dave Ramsey followers. I still allowed for some “luxuries” in my life.

Conquer your debt with these free printables. There is no day like today to get your debt snowball rolling...

Success! Check your email for your first printable.

And then I just got so fed up with my loans, that I decided to go all-in. The first drastic thing I did was stop contributing to my 401(k). That hurt. I wasn’t saving for retirement, and I was missing out on a 5% match.

The second drastic thing I did was take a loan from my 401(k). Nobody recommends doing this. There are like 234234234 personal finance writers out there – they all advise AGAINST a 401(k) loan for any reason. A 401(k) loan is a major no-no among all the financial gurus.

But I did the math. It made sense for me. One of my student loans had a 9.9% interest rate! That’s insane.

(Even though I now owed money to a different company for my 401(k) loan, I still considered this part of my student loan debt.)

Hitting a balance of $0

After taking out the 401(k) loan, I was extremely motivated. I paid off the rest of my private students loans fairly quickly. Then I focused on my federal loans. And finally, when that was done, I focused on my final debt – the 401(k) loan. I did everything I possibly could to make extra payments towards my debt. The debt was melting off.

I did end up contributing to my retirement again (to get the 5% match) before all my loans were paid off. But that hardly affected my timeline for paying off the debt. Each month, I was making thousands of dollars of payments to the loans. Finally, about 7.5 years after graduating, I paid off my final debt. It was such a good feeling!

These student loans are one of the best things that happened to me. They made me work hard during college (I knew I needed to get a good paying job when I graduated, so I picked a good major and worked hard). The student loans taught me so much about personal finance – I wouldn’t be able to get that type of education anywhere. It has set me up for financial success in life (even though ironically, and technically, they set me up with six figures of debt when I graduated).

There is such a negative connotation about student loans. I agree that it is a very serious problem in our country right now, and we should address it. However, I think students loans are also an amazing way to achieve your dreams. You just have to be smart about paying them off.

If I was 18 years old again, and could do it all over, I would – I’d go to the same college and take out the same student loans.

Do you have student loan debt?  Do you have a plan on how to pay it off?