I’m sharing some thoughts on money (both good and bad) that I had when I was paying off debt. Have you had any of the same thoughts?

Despite the fact that there are soooooo many American in debt, it can be very, very lonely carrying debt. When I was deep in student loan debt, I felt so alone.

Most of my friends, coworkers, and my boyfriend were debt-free. They never had to take out any student loans; they did not get into credit card debt; and in some cases, were gifted cars from their parents so never had car loans. Ughhhhhh.

Even the handful of friends who were in debt, ‘only’ owed a few thousand. That just didn’t compare to what I was dealing with. I certainly didn’t know anyone that had a debt balance that was more than twice their annual income. I was so alone in my little debt corner.

I’ve mentioned before that I’m so thankful for the personal finance blogs out there that focus on debt – those bloggers made me feel like there were other creatures like me out there in the world. I was able to completely relate to what they blogged about. For the first time, I didn’t feel alone.

These personal finance bloggers shared many of the same fears, struggles, hopes, disappointments, and accomplishments that I did regarding debt, money, financial goals, and life goals. Sometimes, I would just nod my head up and down furiously at the screen as I scrolled down blog posts about feeling helpless about debt, feeling like you just conquered the world for making a large debt payment, or feeling terrified that you’ll never get out of debt.

It’s such a comforting feeling knowing that someone is going through the same thing you are. So that’s why I decided that I would share with you some thoughts I had when I was in debt.

Maybe you can relate. Maybe it will help you understand what some of your friends in debt are going through. Maybe it’ll convince you that you aren’t alone. Maybe it’ll give you hope.

These are all thoughts I had at some point during my debt-free journey.

Money thoughts that someone in debt probably has had

Here’s my bullet journal spread on money thoughts while in debt!

For the past few months, I’ve been toying with the idea of starting to bullet journal. Yes, I know, I’m about 3 years behind the curve on this. But I just think it’s such a great creative outlet, and could be a very promising way to organize my financial life. I’ve seen beautiful bullet journal spreads on spending logs, budgets, tracking debt, etc. So, I decided, I’m starting a bullet journal with a focus on money and finances. Here’s my very first spread on…you guessed it…money thoughts I’ve had while in debt! 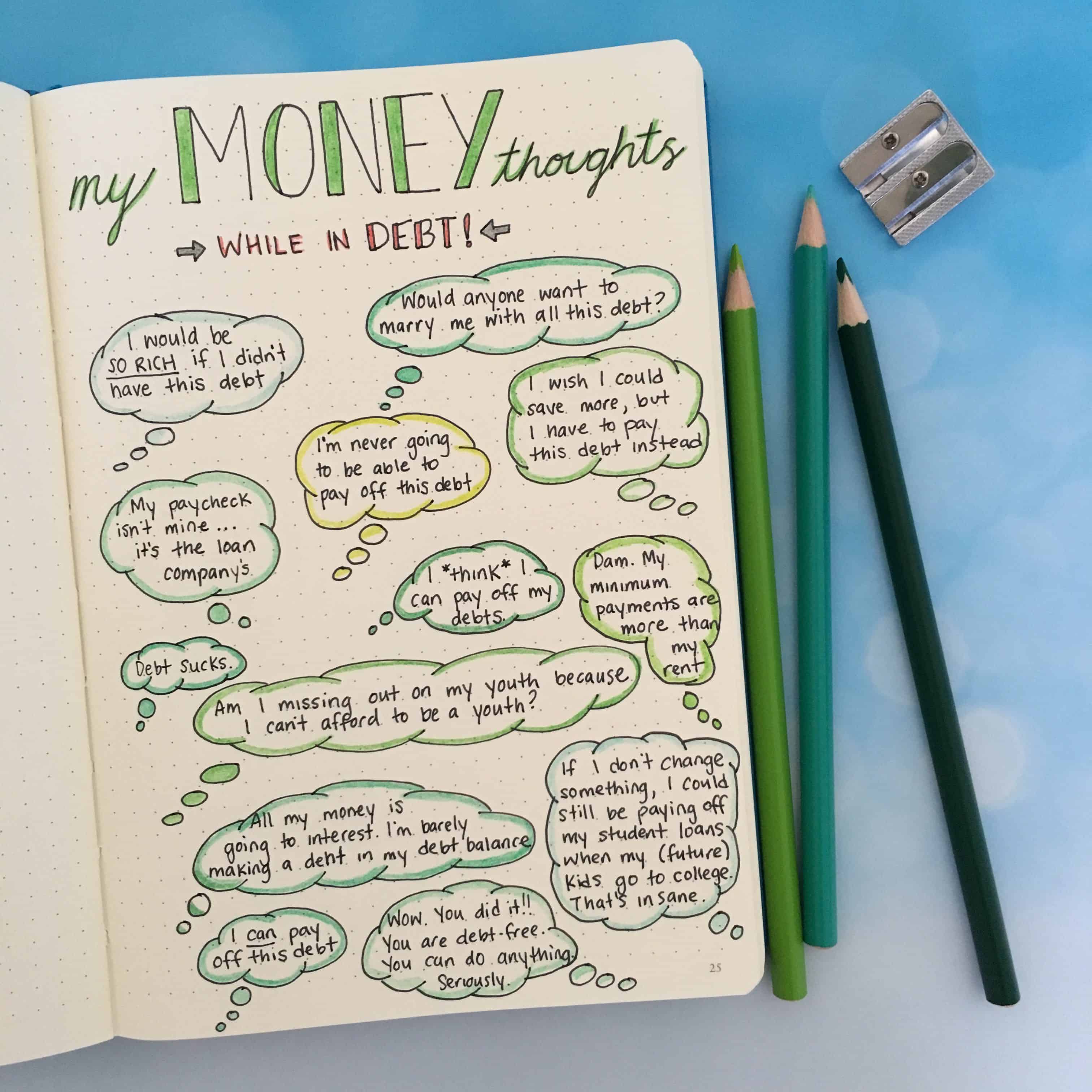 What do you think? I’m not an artist…not even close…but I’m pretty please with how it came out 🙂

I got a bunch of new supplies to start this new endeavor: I absolutely love my Leuchtturm 1917 dotted bullet journal (I got it in the gorgeous blue color Azure…it goes nicely with my blog colors!). I’m also obsessed with my Stabilo pens – they write so smoothly and the colors are so vibrant. I debated getting colored pencils because I hate pencils – I haven’t used them since elementary school. But the Staedtler colored pencils were so highly recommended by bujo enthusiast AND they were cheap, so I decided to take a chance and buy them. I’m so glad I did – I think they take my bullet journal to the next level!

I’m so happy that I finally took the plunge and started this journal – I had been spending months researching the perfect supplies but never did anything about it. After my first spread, I’m in love! I can’t wait to make my next spread!

What are some of your money thoughts on debt?

Being in debt might make you feel stressed, worried, fearful, the list goes on and on… But you should never feel alone. There are hundreds thousands (probably more) people in similar financial situations to you. I hope by sharing some of the thoughts I had when in debt gives you a comforting feeling that you are not alone.

If you are looking to get out of debt, it’s possible. I don’t care how much money you owe, or how many people you owe it to, you can climb out of your debt hole. My #1 suggestion is to head over to my Debt Snowball Method article, read through that method of paying off debt, and download the free printables. I think that’s the fastest way out of debt.

Have you had any of the same money thoughts that I’ve had? What other thoughts have you had while in debt? Did you feel alone in your debt-free journey?