The Debt Avalanche Method is one way to pay off debt. But it’s not always the best method to get out of debt quickly. Find out why it didn’t work for me, and what I used to pay off my massive debt (hint: the Debt Snowball Method). 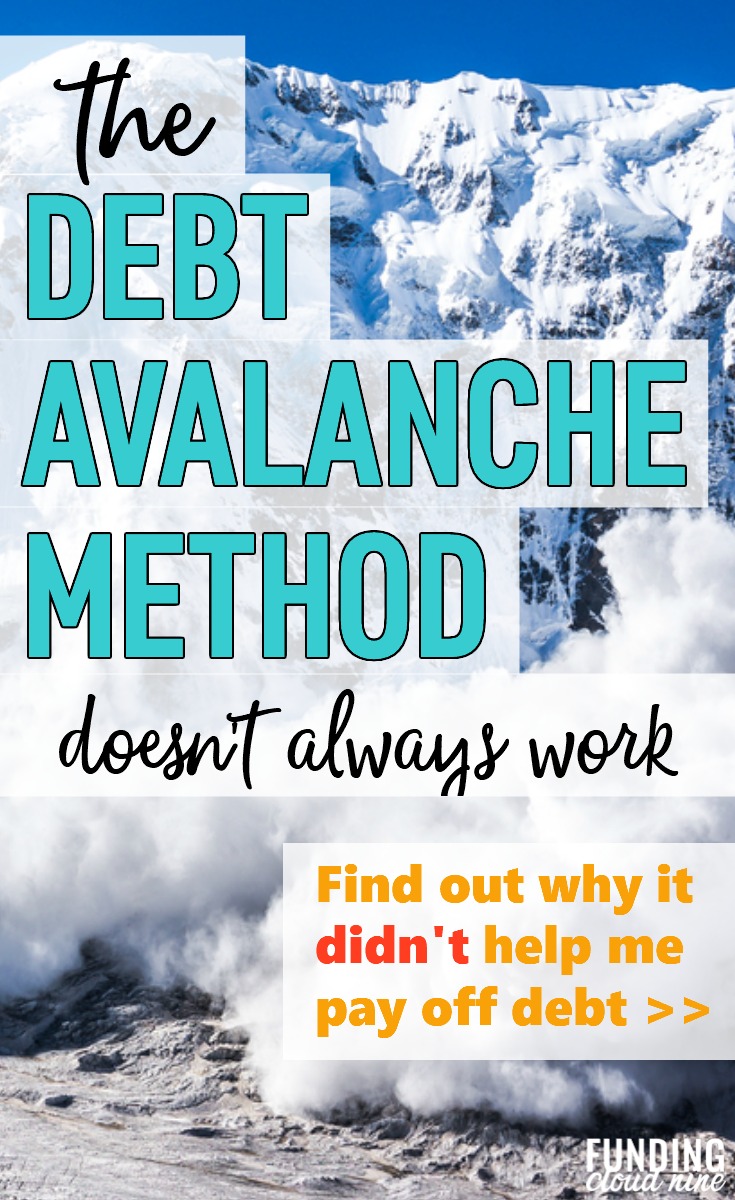 I have always loved math. The numbers, the logic, the fact that there was only ONE right answer.

As a young kid, I would beg (yes, beg) my dad to ask me math problems. From the always difficult ‘8 x 7’ multiplication problem to the fraction questions about pieces of cake, I was always excited to answer the next math question. My love of math remained and eventually I went to college to become an engineer.

When I graduated with that engineering degree, and the associated six figure student loan debt, it only made sense that I start paying off my debt with the most logical and ‘mathematically-proven’ method: the Debt Avalanche Method. Of course you want to pay off your most expensive (highest interest rate) debt first…right?

I tried to aggressively pay off my debt with the Debt Avalanche Method. It didn’t work. I learned that math isn’t the only part of the destroy-debt calculation. Numbers alone don’t solve money problems.

If you are debating if the debt avalanche method will work for you, it might. But I’m here to share with you why it didn’t work for me, and how I did end up paying off my debt.

What is the Debt Avalanche Method?

As I mentioned before, I graduated college with six figures of student loan debt. $125,181 to be exact. I previously wrote about the long, drawn out story of how I paid off my debt, but here’s a quick summary:

I owed an insane amount of debt. In fact, my balance was more than twice my annual starting salary ($125k debt vs $60k income). It took me seven years to pay it off mostly because I paid minimums for the first few years (it didn’t occur to me to pay more!). And then once I made the decision to get out of debt ASAP, I struggled with how to do it.

Why I was initially attracted to the Debt Avalanche Method

I still love math as much now as I did as a kid. And debt, one of my biggest problems, was all math, all numbers. Numbers exploded from my balances, minimum payments, interest rates, budgets, extra payments. I thought paying off debt was a math-lovers dream. Spreadsheets grew, numbers were calculated, debt-free dates were estimated. Over and over again.

As stressful as my debt was, I knew that my math skills and my spreadsheet skills would have the answer. I could literally highlight the answer in a spreadsheet.

The Debt Avalanche Method makes sense mathematically. I really liked that. High interest rate debts cost the most money because you are paying the most interest towards them. It made sense to me to try to get rid of those debts the faster than lower interest rate debts.

I thought it would be SO DUMB to pay more money towards lower interest rate debts (following the Debt Snowball Method). I would be throwing away money. That same money could be used to pay off my high interest debts, and I would get out of debt faster. I would pay less money in interest. DUH! Why wouldn’t I choose the Debt Avalanche Method?!

Why the Debt Avalanche Method didn’t work for me

Attacking my debt with the Debt Avalanche Method made me feel good about my debt-free journey. I was paying off my most expensive debt first – the debt with the highest interest rate. My $30,000 debt had an interest rate of ~7% (and increased to 9%). I was proud of my decision. I followed and trusted the math. I was confident that this was the solution.

But as the months passed (maybe even years?), I realized that I was still in deep, deep debt. I felt like I hadn’t really made a dent in my balance. I was drowning. I was starting to feel demoralized.

I rechecked my calculations. Rechecked my spreadsheet. But I was still six figures in debt. Still stressed. Still unsure about my financial future.

Math never failed me… until I started paying off debt.

That demoralized feeling never went away. I was working so hard and sacrificing so much, but it felt like I wasn’t making any progress. Even though I was putting thousands of dollars each month towards my debt, I never once felt good about it. I never once celebrated. I started to feel less confident. I started to question if I was ever going to get out of debt. I was losing motivation to continue my debt journey.

Eventually, those feelings won. I paid less and less ‘extra money’ towards my payments. I started to just pay my minimum payments. At that rate, I would be over 40 and still have student loan debt.

The debt avalanche method just wasn’t working because I wasn’t seeing any progress. I still had nine different student loans, and the balances weren’t significantly less than when I started. My highest interest rate debt had such a high starting balance ($30,000) that the balance was still pretty high even though I was paying thousands towards it each month. It still felt like I would never pay that one debt off and certainly not all of my debt.

How did I pay off debt

Once I ditched the Debt Avalanche Method, I went back to paying the minimum payments on every debt. But I knew I had to find another solution to pay off my debt.

I went back to the drawing boards without my calculator and spreadsheet. I started to read more and more about the Debt Snowball Method. I initially rejected this method because it made no sense mathematically. This method prioritizes debt from the lowest balance to the highest balance. It completely ignores interest rates! My initial mathematical debt reduction plan (the avalanche method) relied on interest rates. But that plan didn’t work.

So I thought about this method. And thought some more. And genuinely wasted a bunch of time. But eventually I figured “what do I have to lose?”.

So I began my debt snowball method. I started to put all my extra money towards my lowest balance debt. The debt was small (~$3,000) and I had it paid off in a couple months. I was SO EXCITED! I accomplished something. I paid off a debt. It was gone from my life. I no longer owed that minimum payment of $50. I just can’t tell you how good that felt.

So then I focused on my next lowest balance debt. And then my next lowest. I was getting these quick wins. I was making progress. I finally, for the first time, saw the light at the end of the tunnel. It was possible for me to become debt free.

I am now debt-free and I owe it to the Debt Snowball Method. That illogical, mathematically wrong method was what changed my life.

Debt Avalanche vs Debt Snowball: Which is better?

Spoiler alert: I can’t tell you which method is better. The answer is going to be different for each person.

But I just told you my story and maybe it will help you choose which method is best for you. I started using the Debt Avalanche Method because it made mathematical sense. High interest rates are bad, so get rid of them first, right? Well, that mathematical logic didn’t work during my debt-free journey. The Debt Avalanche Method didn’t help me pay off my debt because I didn’t feel like I was making any progress.

Once I started using the Debt Snowball, I started to see quick wins. I was paying off entire debts and that made me feel excited and motivated to pay off more debt. Instead of slowly lowering my extra payments like I did during my debt avalanche, I started looking for ways to pay even more towards my debt snowball.

The debt snowball worked for me. It’s what I would recommend to every single person in serious debt.

How are you paying off your debt? With the Debt Avalanche Method or the Debt Snowball Method?